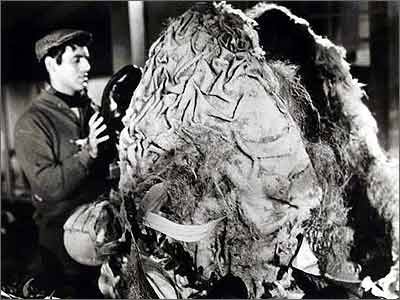 When I was 19 years old, I was in a community theater production of the musical Little Shop of Horrors.  Though I think I would have made the perfect Audrey, everybody always snickered whenever I sang so I ended up as a part of “the ensemble.”  Being in the ensemble basically meant that I spent a lot of time dancing and showing off lots of cleavage.  And you know what?  The girl who did play Audrey was screechy, off-key, and annoying and after every show, all the old people in the audience always came back stage and ignored her and went straight over to me.  So there.

Anyway, during rehearsals, our director thought it would be so funny if we all watched the original film.  Now, I’m sorry to say, much like just about everyone else in the cast, this was my first real exposure to the original and all I really knew about it was that Jack Nicholson had a very early role in the film.   However, I’m also very proud to say that — out of that entire cast — I’m the only one who understood that the zero-budget film I was watching was actually better than the big spectacle we were attempting to perform on stage.  Certainly, I understood the film better than that screechy little thing that was playing Audrey.

The first Little Shop of Horrors certainly isn’t scary and there’s nobody singing about somewhere that’s green (I always tear up when I hear that song, by the way).  However, it is a very, very funny film with the just the right amount of a dark streak to make it perfect Halloween viewing.

Rumored to have been filmed in 2 days in 1960, the original Little Shop of Horrors tells the story of Seymour (Jonathan Haze), a meek little weirdo who works in a skid row flower shop in Los Angeles.  His boss, Mr. Mushnick (Mel Welles), treats him terribly but Seymour is usually too busy gazing at his co-worker, the sweet but dim Audrey (Jackie Joseph), to care.  Mrs. Shiva (Leola Wendorff) comes in every day, usually to buy flowers for the latest funeral that she has to attend.  And then there’s Bronson Fousch (Dick Miller), who regularly stops by to eat the flowers.  But, despite those two regular customers, the shop doesn’t do much business, largely because the boss is a jerk and the employees aren’t exactly intelligent.  In fact, it looks like Mushnick’s may be on the verge of going out of business!  And if Seymour loses his job, he’ll not only lose Audrey but he won’t be able to raise the money to get his mother an iron lung.

However, Seymour has a solution!  He’s crossbred a butterwort and a Venus flytrap, creating a new plant that he calls the Audrey II.  Seymour is convinced that this new plant will save the store and, indeed, the plant does soon become the talk of skid row.  It’s kind of an ugly plant and yet, it just keeps getting bigger and bigger!  Mushnick declares that Seymour is like a son to him!  The local high school wants to feature the plant in their homecoming parade!  Even Mr. Fousch admires the plant, in between eating flowers.  The only people not admiring Audrey II are the local cops.  They’re too busy investigating a string of disappearances to worry about a new plant.

Of course, what no one but Seymour knows is that the plant not only needs human blood to survive but that it can also speak!  Of course, it only talks whenever it’s alone with Seymour.  “Feed me!” the planet demands.  When Seymour says that he’s getting tired of killing people, the plant responds by hypnotizing him.  Of course, hypnotizing Seymour doesn’t take that much effort.  Seymour’s not exactly the brightest bulb to ever be screwed into a socket.

Back when we were all watching this movie backstage at the community theater, a few members of the cast insisted that Seymour was being played by Jack Nicholson.  I’m not sure why they thought that, considering that Jonathan Haze looked and sounded absolutely nothing like Jack Nicholson.  (If anything Haze looked like he could Jerry Lewis’s cousin.)  When Nicholson does finally appear in his tiny role, he is immediately recognizable.  (Nicholson was 23 when he appeared in Little Shop but he already had the receding hairline, the eyebrows, and the voice.)  Nicholson plays Wilbur Force, a patient of a skid row dentist.  Wilbur is a masochist who reads Pain Magazine and who gets very excited about the prospect of having the drill used on his teeth.  It’s a funny enough performance but Nicholson is still only on screen for less than five minutes.  Of course, once Jack became a star, Little Shop of Horrors was suddenly promoted as being a Jack Nicholson movie. 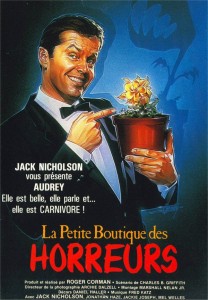 Anyway, the original Little Shop of Horrors is an enjoyably silly lark of a movie.  The rumor has always been that Roger Corman directed the film in order to win a bet as to whether or not he could a make a movie in two days.  That’s a fun story, though it’s been debunked.  Corman shot all of the interiors in two days because he only two days until the sets (which were left over from his previous film, A Bucket of Blood) were scheduled to be torn down.  Furthermore, the rushed shooting schedule was largely a result of Corman’s desire to finish filming before new industry rules concerning the way in which actors were paid for their work went into effect.

(To be honest, I like the Corman was trying to win a bet story better.  I’m going to choose to believe that, even if the real story makes more sense.)

Because of that rushed shooting schedule, Little Shop of Horrors has a fun, improvised feel to it.  The film is full of members of the Corman stock company, all playing memorably weird characters.  There’s really not a single “normal” person to be found in the entire film.  Jack Nicholson may get all the attention but, for me, the film’s best performance comes from Dick Miller.  Miller delivers his bizarre lines in a winningly casual manner.  Even when his character is merely observing the action, Dick Miller is always doing something odd in the background.  He’s just a really joy to watch, the definition of a scene stealer.

Of course, the star of the film is Audrey II.  The plant may not sing in this version but still, I defy anyone to get through this entire movie without once imitating that whiny little plant’s cries of “Feed me, Seymour!”

Finally, who can resist the end of this movie?  “I didn’t mean it!” Seymour whines.

Anyway, if you haven’t seen the original Little Shop of Horrors, you owe it your to do so!  It’s a fun movie, full of weird dialogue, strange performances, and noirish black-and-white cinematography.  And it’s got a talking plant!  What’s not to love?