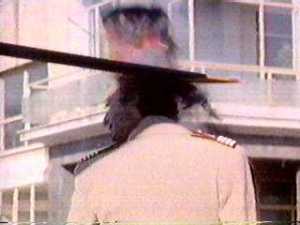 In Holocaust 2000, Kirk Douglas plays a businessman who wants to build a gigantic nuclear power plant in the Middle East.  There are a few problems with this plan.  First off, the site that Douglas selects just happens to be right next to a cave that is full of religious artifacts.  Secondly, there’s a handful of angry environmentalists picketing his London office.  And, perhaps the biggest problem, Douglas’ son happens to be the Antichrist.  This fact is obvious to the viewer because not only is his son named Angel (yes, we’re in the land of irony) but he also looks and acts nothing like Douglas.  Not only does Angel have a noticeably weak chin (no cleft to be seen at all) and speak with a rather posh accent but he’s also so extremely English that he’s even played by an actor named Simon Ward.

In other words, the viewer is pretty much in on the game from the beginning.  What makes the movie work is that director De Martino understands that everyone’s going to know that Angel’s the antichrist from the minute he first appears so, as opposed to the Omen films, he doesn’t waste a lot of time playing any “is-he-or-isn’t-he” games.  Instead, in the great tradition of Italian exploitation, De Martino jumps straight into the apocalypse without worrying about things like narrative cohesion and the end result is an enjoyably chaotic film that rarely makes sense but is never boring.  Whereas the Omen films are almost tedious in their attempts to provide theological justification for all the blood that’s spilled on-screen, Holocaust 2000 has a cheerful, let’s-make-it-up-as-we-go-along feel to it that, at times, almost makes the whole thing feel like some long lost Lucio Fulci film.

Holocaust 2000 is probably best known for two sequences.  The first features a helicopter blade very graphically chopping off the top of a man’s head.  If seeing the original Dawn of the Dead made me nervous around helicopters, seeing Holocaust 2000 has ensured that I will never ever step anywhere near one of those things.  Seriously, I’ve seen a lot of gore over the past few years but the decapitation scene in this movie …. well, perhaps it’s best to just shudder and move on.  (For the record, Holocaust 2000 came out before Dawn of the Dead so the helicopter decapitation scene here was not stolen from that film.  If anything, it was simply a more graphic version of David Warner losing his head in the Omen.)

The second sequence is a scene in which a very nude Kirk Douglas (who, it must be admitted, looked a lot better at 61 than most 20 year-olds do today) has a nightmare in which he watches the world literally come to an end.  Set to Ennio Morricone’s intense and memorable score, this sequence manages to be surreal, disturbing, and entertaining all at the same time.  It epitomizes everything that makes Holocaust 2000 such a surprisingly effective work of pure cinematic exploitation.

Like many of the great Italian horror films, Holocaust 2000 was released under several titles.  It is currently available on DVD under the title Rain of Fire and a big bleh to Lionsgate for choosing to go with such a boring name.  Admittedly, I can see their logic.  Though the movie was first released in theaters in 1977, it took 31 years for it to show up on DVD.  During that time, 2000 came and went and the world didn’t end (or maybe it did and the last 10 years have just been an extended hallucination, the choice is yours).  But still, Rain of Fire sounds like a substandard country song about a nasty divorce that ends in murder.  On the other hand, a title like Holocaust 2000 – nakedly exploitive and borderline offensive — represents everything that we’ve come to so love about Italian horror films. 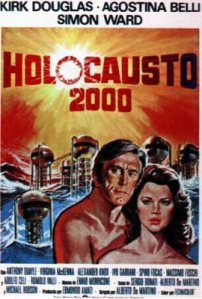