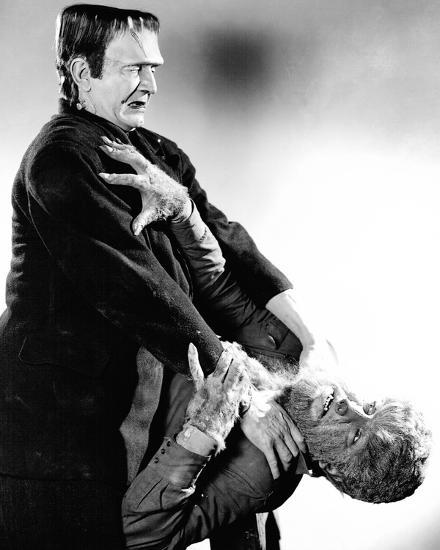 Released in 1943, Frankenstein Meets The Wolf Man was the first of the Universal horror movies to feature the monsters meeting.  (Dracula would join both Frankenstein’s Monster and the Wolf Man in later films.)  In our current age of the MCU and Zack Snyder super hero movies, that might not seem like a big deal but I’m sure it was huge in 1943.  Were the Universal Monster Movies the first example of a shared cinematic universe?  To be honest, I have no idea but it sounds good so let’s go with it.

Frankenstein Meets The Wolf Man starts, as so many Frankenstein films have, with a little bit of grave robbing.  Except, this time, the grave robbers aren’t looking for body parts.  Instead, they break into the Talbot family crypt because they’ve heard that Larry Talbot was buried with a lot of jewelry and money.  As the grave robbers wander around the crypt, they recap for us everything that happened in The Wolf Man.  Finally, they open up Larry’s coffin and are confronted with the dead body of Larry Talbot himself!  (Larry is, once again, played by Lon Chaney, Jr.)

Unfortunately for our grave robbing friends, there’s a full moon out.  As soon as the moonlight shines on Larry, he comes back to life and promptly transforms into … THE WOLF MAN!

After killing one of the robbers, the Wolf Man runs out of the tomb.  The next morning, once again human and alive, Larry Talbot wakes up in some bushes.  He’s arrested by the police.  He’s sent to a mental hospital.  He transforms a few more times and kills a few more stock characters.  And during all of this, Larry tells anyone who will listen that he just wants to be cured of his condition so that he can die and stay dead.

It was at this point that it occurred to me that Larry Talbot is perhaps the whiniest werewolf in film history.

Eventually, Larry decides that maybe the famous Dr. Ludwig Frankenstein could help him!  So, he breaks out of the hospital and travels to Germany (though, since the film was made during World War II, we’re never specifically told that he’s in Germany).  Accompanying him is Malena (Maria Ouspenkaya), the gypsy woman from the first Wolf Man.

In  a generic Eastern European country, Larry finds out that Dr. Frankenstein is dead and his research is missing.  Larry does, however, discover the frozen body of Frankenstein’s Monster (now played by Bela Lugosi).  After reviving the monster, Larry is upset to discover that the Monster not only doesn’t know where to find Frankenstein’s research but that, after dealing with their crap for four movies, the Monster doesn’t really seem to care about doing anything other than harassing the local villagers.

Fortunately, Larry does get to meet Ludwig’s widow (Illona Massey) and get a chance to tell her about how much he wishes he was dead.  Probably just to get him to shut up about how terrible his existence is, the widow agrees to help Larry.  She gives him Ludwig’s research and Larry believes that he’s finally found a way to end both his life and the Monster’s!

Unfortunately, it doesn’t quite work that way.  For one thing, Larry is working with a scientist (played by Patric Knowles) who doesn’t think that the Monster needs to be destroyed.  Secondly, Larry keeps forgetting to keep track of the lunar cycles.  That full moon is continually taking him by surprise.

It all leads to a final battle between Frankenstein’s Monster and the Wolf Man.  It only lasts for a little less than 10 minutes so it’s hard not to be a bit disappointed but at least no one talks about having a mother named Martha.

Can you imagine that conversation?

“Why you say Martha?”

Frankenstein Meets The Wolf Man isn’t necessarily a good movie but it is a lot of fun to watch.  It helps, of course, if you’ve seen the other Universal horror films.  Part of the fun is spotting members of the Universal stock company, like Lionel Atwill and Dwight Frye, and seeing who they’ll be playing this time around.  One thing that I did legitimately appreciate is that the film made at least some sort of an effort to maintain a continuity with both The Wolf Man and Ghost of Frankenstein.  It appears that some actual thought was put into explaining how both the Wolf Man and the Monster were still around after the events of the last two films.  That shows more respect for the audience that you’ll find in most modern films. 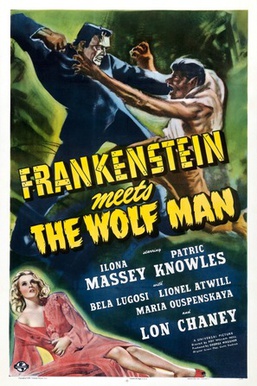