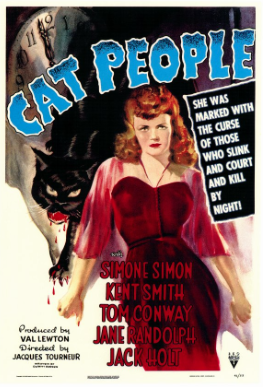 The 1942 horror classic Cat People is often described as being a horror film where, up until the last few minutes, the monsters are mostly psychological.  And there is some definite truth to that.  The title creatures remain a mystery for the majority of the film and, up until those final minutes, the audience would have every right to wonder whether or not they actually existed.  This is a film that seems to take place almost totally in the shadows, a film noir without detectives or gangsters but featuring a memorable and compelling femme fatale.

However, I would argue that there is a monster who is present on-screen long before the audience first sees the shadowy form of a cat person.  That monster is named Louis Judd and he’s the true villain of this story.  As played by Tom Conway, Louis Judd is a psychiatrist and, from the minute we first see him, we know that he’s not to be trusted.  He’s far too smooth for his own good and his soothing tones barely disguise the arrogant condescension behind his words.  If his pencil-thin mustache didn’t make him sinister enough, Dr. Judd also keeps a sword concealed inside of his walking stick.

Irena Reed (Simone Simon) is one of Dr. Judd’s patients.  A fashion designer from Serbia, Irena has recently married an engineer named Oliver Reed (Kent Smith).  Despite the fact that she loves Olivier, she cannot bring herself to be intimate with him.  As Dr. Judd discovers, Irena fears that she has been cursed and, if she ever allows herself to become aroused, she will be transformed into a panther.  Dr. Judd repeatedly tells her that her belief is just superstition and that her fears are the result of repressed trauma from her childhood.  When Irena refuses to accept his diagnosis and continues to insist that she is cursed, Dr. Judd assumes that he can prove her wrong by forcing himself on her.  (Big mistake.)

Meanwhile, Oliver loves Irena but her refusal to consummate their marriage is driving him away.  He finds himself growing more and more attracted to his co-worker, Alice (Jane Randolph).  At first, Irena is upset to discover that Oliver has been telling Alice about their problems.  But eventually Irena realizes that all she can do is watch as Oliver and Alice grow closer and closer.  Irena knows that she can’t give Oliver what he desires but the confident and outspoken Alice can.  As Irena grows more and more jealous, Alice starts to feel as if she’s being watched and followed.  She starts to hear growls in the shadows and when she’s at her most vulnerable — swimming alone at night — she is shocked when Irena suddenly appears and demands to know where Oliver is.

And really, that’s what makes Cat People such a great film.  It’s not necessarily a scary film, at least not to modern audiences.  Sadly, we have seen so much graphic real-life horror and have become so jaded by CGI that we’re no longer scared by the mere cinematic suggestion of a monster.  But the film still works because we can relate to both Irena and Alice.  When I look over my relationships, I can see times when I’ve been both the insecure Irena and the confident Alice.  For a film where the word “sex” is never uttered once, Cat People is a penetratingly honest look at relationships, love, and sexuality.

And it also features a truly memorable monster.

Seriously, that Dr. Judd is the worst!