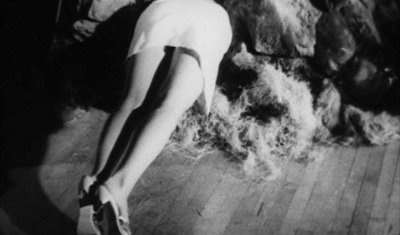 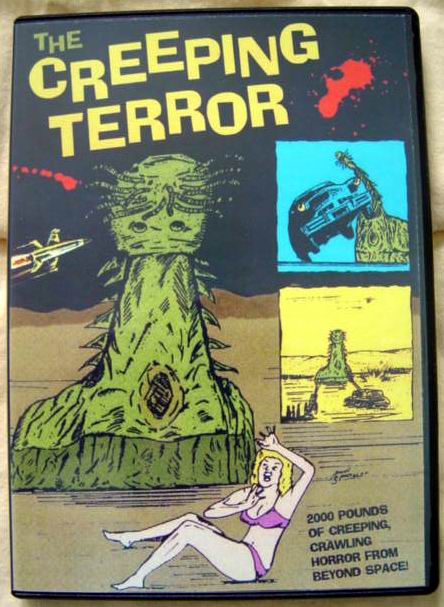 While at first it might seem like The Creeping Terror and Dr. Strangelove don’t have much in common, that’s actually not the case. Both of these films were released in 1964. Both of them feature a scientist and a general who wants to blow things up. Both of these films portray an American military that’s incompetent when it comes to dealing with the unexpected. Even more importantly, both of these films are in black-and-white.

Beyond that, the two films don’t really have that much in common. Dr. Strangelove is a satire about nuclear war and was nominated for several Academy Awards. The Creeping Terror is a film about a killer rug that eats people and is currently in the public domain.  (Look for it on YouTube!  You won’t be sorry.)

Okay, technically, the creeping terror of the title is not a killer rug. It just looks like a rug. Actually, it’s an alien being that crashes down to Earth and spends the majority of the film moving very slowly through a small town. Whenever it comes across an old man out fishing or a group of 30 year-old high school students dancing to the most generic music ever heard, the rug attacks and we’re treated to lengthy scenes of giggling extras climbing into the rug’s “mouth.”

Fortunately, there’s a local deputy sheriff and newlywed named Martin and Martin’s pretty concerned about this killer rug that appears to be eating everyone in town. Martin doesn’t really do much but he’s played by the film’s director (an enigmatic figure who went by the name of Vic Savage) so, by default, Martin’s the main character.
The Creeping Terror is probably best remembered for the fact that the film’s soundtrack apparently got lost during post-production and, as a result, nearly the entire film is silent with the exception of a narrator. For example, we might see Martin silently moving his jaw while the narrator recites, “Martin told them what he had seen…”

However, the narrator is not just there to tell us what people are saying. He’s also there to provide psychological insights. In one of the film’s more famous moments, the action stops for a few minutes so the narrator can tell us about how Martin’s recent marriage has strained his relationship with his bachelor friend Barney. During this moment, the narrator drops his usual even tone and soon, hints of self-loathing and anger start to turn up in his voice. Seriously, the narrator’s got some issues.

Now, a lot of people will tell you that The Creeping Terror is one of the worst films ever made but I think it’s hilarious and fun. Add to that, there’s a lengthy dance scene dropped into the middle of all this and you know how I am about movies with gratuitous dance scenes.  Add then, when you add dancing with self-loathing narration and killer carpet, you simply cannot deny that The Creeping Terror is a classic of its own kind. 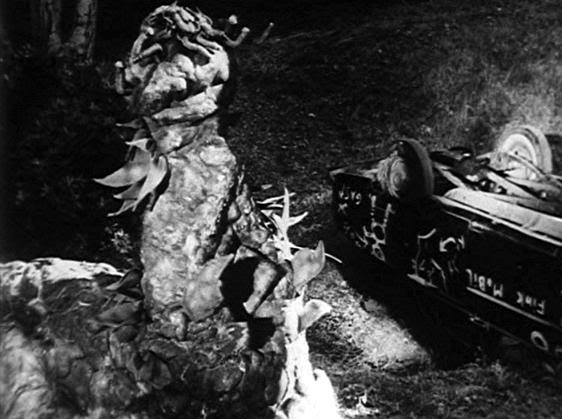 2 thoughts on “The Creeping Terror (reviewed by Lisa Marie Bowman)”